The Orange County Fair is an annual event which dates back to 1889 when it was just a small five-day festival. Over the years it’s grown and added rodeos, a petting zoo, carnival rides, various contests showcasing visual and creative arts, culinary contests, and of course all the fried food you can imagine.

Last year I entered the OC Cupcake Classic, which was a special event for cupcakes only. It was done as a live judging event and I, along with my supporters, spent the afternoon at the fair trying fried food, playing carnival games, drinking beer and waiting for what seemed like forever for the results. Out of 1020 or so entries in about six categories, my Irish Car Bomb cupcake placed 4th in the “chocolate” category and my Cannoli cupcake placed 9th in the “vanilla” category. I’ll stop now and say had I really paid attention to the “vanilla” category thing I might have placed higher if I put a vanilla bean frosting on my cupcake rather than the chocolate frosting I usually make with that cupcake. Live and learn right? Anyway, I was pretty pleased with the outcome and surprised to have placed at all, so I was glad to come home with more than just my “participant” ribbon.

This year I was dismayed to find out the OC Cupcake Classic was not being held. I was told by OC Fair organizers they try to change the special culinary contests every few years and they decided on different contests for this year. However, I was encouraged to enter the regular culinary arts contests for baking. So I decided to go for it! They had three categories in the cupcake division, fruit, chocolate and other. I took to social media to help me decide which cupcakes I should enter and the overall consensus was a Mango cupcake for “fruit”, the Thin Mint cupcake for “chocolate” and the Maple-Bacon Beer-Batter cupcake for “other”. I had several people as guinea pigs for the Mango cupcakes and made the Thin Mint cupcakes for birthdays and graduation parties earlier in the year with good reviews. Since I first made the Maple-Bacon Beer-Batter cupcake last year people loved it, dubbed it the “Breakfast Cupcake” and said I should definitely enter it in the fair for this year.

I made my entries and dropped them off for judging several days before the fair opened and since I only needed to submit four cupcakes, I sold the rest to friends and family. (Thanks again to all who purchased for always supporting me!)

I went to the opening day of the fair to see the results and was shocked to find the Maple-Bacon Beer-Batter cupcake placed 2nd out of 27 entries in the “other” category! While my other two entries did not place, I did get some good feedback and am already thinking of what cupcakes to enter for next year! 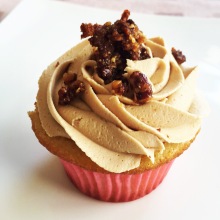 Participating in the fair the past two years has been not only an exciting experience, but also rewarding. I began baking cupcakes for fun, making them for family desserts and friends parties. However, it has now grown to include making and selling them to people for parties and events. Overall, I think receiving recognition in a public competition has inspired me to learn more about baking and decorating cupcakes and more seriously consider turning a hobby I enjoy into something I can do after I retire from my current career.